Although you may be unfamiliar with the term power quality (PQ), you are likely to be aware of the consequences of PQ problems. Losing computer data to a blackout or experiencing damage to a stereo system caused by a lightning strike are just two examples of how these problems can become an unwelcome guest in your home.

Technically speaking, power quality refers to the degree to which the electricity you use in your home is free of disturbances that can cause electricity-consuming devices to malfunction or fail. PQ problems can affect many appliances in your home, especially electronic equipment dependent on microprocessors. Computers, stereo systems, satellite receivers, and other appliances may be damaged or may fail prematurely if they are not protected from harmful voltage changes and related disturbances.

Utilities strive to provide highly reliable and consistent electric power. In the course of normal utility operations, however, voltage will inevitably fluctuate as loads come onto or leave the power system or the utility switches among various sources of electricity supply. It is not possible for utilities to maintain perfectly constant voltage 100 percent of the time.

PQ events also occur for reasons that have nothing to do with your utility. Lightning strikes can cause major power surges. More subtle PQ problems often originate within the home and can be traced to the starting and stopping of refrigerator and air-conditioner motors, circuit overloads, or grounding and wiring problems.

Why Is This Important?
Depending on the size of the voltage fluctuation, PQ problems can vary in severity, ranging from brief malfunctions to immediate equipment failure. Small fluctuations may not cause any problems initially, but if left unchecked, these events can lead to equipment degradation over time. If you have significant investments in home entertainment systems, office equipment, or critical medical equipment, you need to take responsibility to protect yourself against PQ related harm.

How Can You Protect Your Home?
There are two major ways to protect your equipment from surges. First, you can provide protection at the point of entry: that is, at your electrical panel or meter. Second, you can install protection at the point of use, where sensitive pieces of equipment connect to electrical outlets. A combination of point-of-entry and point-of-use devices will provide the greatest level of protection.

Point-of-Entry Protection: Meter-Based Devices
Some utilities lease surge-suppression devices that are attached to the electric meter (see Figure 1). These devices go by various names, including “whole-house surge suppressors,” “secondary surge arrestors,” and “meter-socket adaptors.” They provide the first line of defense against surges that come through utility power lines. A meter-based suppressor can only be installed by your utility. 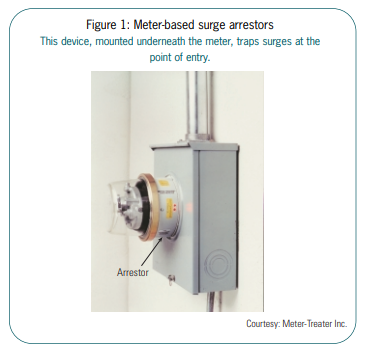 Point-of-Entry Protection: Panel-Mount Suppressors
Another type of surge suppressor can be installed in or adjacent to your home’s electrical panel. These “panel mount” or “hard-wired” surge suppressors protect against surges that come through utility power lines. Additionally, they can keep surges that originate on one of your home’s electrical circuits from spreading to other circuits.

Surges caused by lightning can enter homes through underground circuits that supply electricity for pool
pumps, outbuildings, or other external uses. A surge received on one of these circuits could damage equipment on other circuits unless a suppressor at the electrical panel blocks it. Surges from lightning can also enter your home through telephone and cable-television circuits. Special hard-wired suppressors can be installed on these circuits. A qualified electrician should install hard-wired surge suppressors.

Point of Use: Plug-in Surge Suppressors
Plug-in surge suppressors provide affordable but somewhat limited protection for sensitive equipment. Often designed as power strips with multiple outlets, they protect only the devices that are plugged into them (see Figure 2). Other plug-in surge protectors fit over wall outlets. Some models include jacks for telephone and cable-television lines. 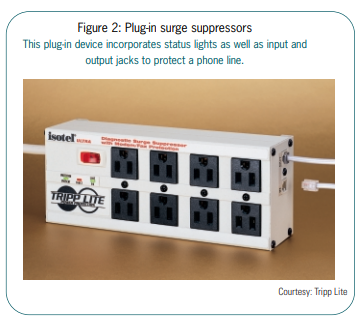 Not all power strips provide surge protection. You should select devices that are UL 1449 Listed, meaning that samples have been found to meet the Underwriters Laboratories (UL) standard for surge suppressors. Associated with the UL listing is a number indicating the maximum amount of voltage the suppressor will allow to flow to your equipment. The lower this voltage rating the better.

You can purchase plug-in surge suppressors from computer, hardware, and office supply stores for anywhere from $10 to more than $100. A higher price doesn’t ensure a higher level of protection. See Table 1 to learn how you can make the best choice when selecting a plug-in surge protector. The more effective units combine several different surge-protection components. Sine wave tracking is a sophisticated feature that is advisable only if you have equipment that is particularly sensitive to harmonic distortion; this is not an issue for most consumers.

Point of Use: Uninterruptible Power Supplies
If your voltage drops or your power goes out, even for a fraction of a second, computers and some other types of electronic equipment can malfunction or “freeze.” You can keep your computer running smoothly through voltage sags and brief outages by connecting it to an uninterruptible power supply (UPS), which provides backup power from batteries (see Figure 3). For longer outages, a UPS can buy you at least enough time to save your work on a computer. UPSs typically include some level of surge suppression.

Table 2 describes different types of UPSs. Standby units are adequate for protecting most electronic equipment (including computers) from brief sags and outages. Line-interactive and on-line UPSs may also provide constant voltage regulation and protection from other types of PQ disturbances such as harmonics.

To conservatively estimate the correct size of a UPS for a particular application, compare the UPS’s listed
output in watts with the higher of the volt-amperes (VA) numbers listed on your appliance. For example, if
the computer you want to protect is listed at 130 to 170 VA, look for a UPS providing at least 170 watts of
output. UPSs are readily available from a number of retailers, and some utilities lease units.

The Bottom Line
Utilities cannot provide 100 percent protection against all PQ problems you may experience in your home. Lightning strikes and fluctuations caused by home appliances are examples of how some causes of PQ problems are outside of your utility’s control. Consequently, you may want to take charge of protecting your electronic equipment from the effects of power surges, sags, and other disturbances.

© 2003 Platts, a Division of The McGraw Hill Companies, Inc. 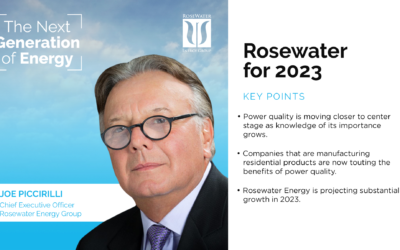 Energy storage is on the rise in nations around the world as a result of the global energy crisis caused by the... 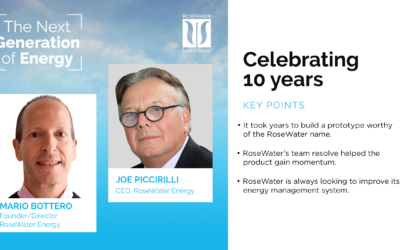 In this episode, our co-founders Mario Bottero and Joe Piccirilli reminisce about RoseWater Energy's first 10 years in... 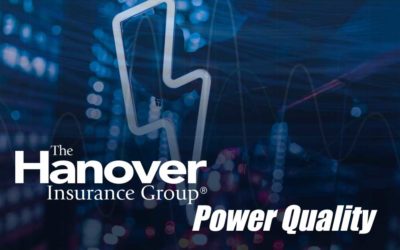 Here is what you can do to help protect your equipmentWhen a transformer overheats, circuit breakers trip, or...